I decided to combine these two into one post because they pretty much deal with the same issue – renewable energy and how to get it.  With the increase of gas prices (which now seems like a small problem compared to the larger economic crisis) these two issues got on the ballot and are an attempt to move California in the direction of renewable energy.  Here they are: 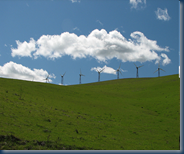 Would require publicly and privately owned utility companies to generate 20% of their power from renewable energy by 2010, 40% by 2020 and 50% by 2025 and would impose penalties (subject to waivers in some circumstances) for failure to meet these requirements.

Why: I don't like the idea of the government forcing utility companies to do this.  The trend is going in that direction anyway and energy companies are going to move toward renewable energy in order to stay in business.  All I see this doing (besides making some people feel like they're socially and environmentally responsible) is increasing utility bills for us as the companies try to meet certain benchmarks by certain dates.

Find out more about Prop 7 here.

Prop 10 would allow the state to sell $5 billion in bonds, of which $3.425 billion would be used to help consumers and others purchase high fuel economy or fuel efficient vehicles and $1.25 billion would be used for research and development of  renewable energy technology (primarily solar).  The remainder would be used to give grants to cities for renewable energy projects.  California's independent legal analyst estimates the cost to California to be $10 billion in principal and interest, with additional state costs of $10/million for administration.

My vote: Hell no.

Why: Should be obvious by now.  Lots more spending, creating more government administration/bureaucracy - surely we can find better things to do with our money.

Find out more about Prop 10 here.

Email ThisBlogThis!Share to TwitterShare to FacebookShare to Pinterest
Labels: politics

The only problem with your analysis of Prop 7 is that CA isn't moving in the direction of renewable energy on it's own. The CA legislature keeps killing the bill to raise the renewable standard from 22% to 33%. PG&E, Edison and SEMPRA don't have to even follow the renewable standard set right now. All they have to do is pay money to get out of it. The other thing is that these utility companies aren't going to move towards renewable energy on their own because they know that it will cost us less in the future.

Thanks for the comment/input. The legislature's stupidity is something that we need to deal with via the redistricting measure and I'm with you on that.

I think the utilities will move toward renewable energy because it's the way for them to stay in business. If they don't make the move they won't be in business in 10-20-30 years.

PG&E and Southern California Edison are spending $ 23 million to oppose the bill. These same utilities are the ones raising our electric rates as much as 16%. They want to keep making profits from selling energy generated from coal and imported fossil fuels.

There are over 200 environmental organizations in the state and only a handful are opposed to Prop. 7. These same groups like the NRDC helped the Big Utilities pass deregulation which caused the energy crisis in 2001. They have sided with the Utilities before and were wrong.
The independent, non-partisan California Legislative Analyst reported that the total cost of Prop 7 to the state was 3.4 million. That is .0002% of the state budget. AND, Prop 7 guarantees that the solar and clean energy that is built with Prop 7 will never raise your rates more than 3% in 2025.
Prop 7 requires that 50% of California's electricity comes from renewable sources by 2025. It also says that the renewable energy utilities buy to sell consumers can cost up to 10% more than non-renewables like coal and natural gas. This 10% cost cap ensures your bill will never go up more than 3% because of Prop 7.

Now this is how your utility bill breaks down

50% of your bill goes to the cost of doing business; company overhead (salaries,facilities)

Prop 7 says that half of the 50% of the bill that reflects the cost of energy must be renewable by 2025which is 25% of your total bill.

So, in a worst case scenario all of this renewable electricity – which makes up 25% of your bill - can be 10% more expensive than what you use now. Which works out to a 2.5% increase on your whole bill. We are rounded up to 3% to be safe.
Please don't be fooled and vote YES on 7 for a cleaner California.

I appreciate the comments. I am puzzled by your statement that only a few environmental groups are opposed to Prop 7. A visit the ballotpedia shows these are just a few of the groups in opposition:

-
I think it's pretty tough to get all those people on one side. The Green Party is even against it? Are they getting paid off by PG&E? Or is it more likely this is an ill-conceived bill that sounds nice but in the end is counterproductive?