I had a second root canal scheduled for this past Tuesday and I cancelled it, thinking I would be able to hold off for at least the rest of the year because it had stopped hurting. The tooth had remained a bit sensitive to pressure but mostly felt fine. Yesterday something happened (I'm not sure what) and the tooth is way more painful than it has ever been. It is throbbing right now, and touching it results in very bad things. Figures this would happen on a Saturday morning. I am hoping/praying the dentist calls me back today so I can get this taken care of tomorrow or something. Tooth pain sucks. At least after this root canal is done I'll really be done with all this tooth stuff. I have a few fillings that need to be done but those are easy.
Posted by Jackson at 09:23 No comments:

See the article here. I wonder if Ohlone has a chess team.
Posted by Jackson at 16:13 No comments:

Email ThisBlogThis!Share to TwitterShare to FacebookShare to Pinterest
Labels: sports

Arminian Theology: Myths and Realities is a readable theology book by Roger Olson meant to set the record straight on Arminianism.  It is not so much a defense of

Arminianism meant to persuade people to become Arminians.  His intention is to clarify what Arminianism actually is, on issues like the sinfulnes of man, predestination, God's grace, soteriology, and so forth.  If those words mean nothing to you, you will find this book pretty boring.  Anyway - if you're interested in the whole Calvinism vs. Arminianism thing, or want to learn more about it, I highly suggest you read this book.  It is quite popular for people on both sides to caricature the other, and this book will give you a clear presentation of what Arminianism is.

I was surprised to read much of what I did, given the fact that much of what I had learned about Arminianism up to this point was from people quite hostile to it.  For example, before reading this book I assumed that all Arminians belived it was possible to lose your salvation if you didn't continue to do good works.  Many people, especially on the internet, like to equate Arminianism to heresy or Pelagianism.  This book does much to clear up such mischaracterizations of Arminianism and display its legitimate evangelical and even Reformed roots.  I hope more and more people on both sides are able to read it and become better educated on what Arminianism is.  Even if you disagree with it, it is important to read a declaration of Arminian Theology from an unapologetic, well-educated, well-informed, and irenic Arminian.  That way you can be sure you are actually disagreeing with Arminianism rather than condemning people for believing something you don't understand.

This is Sparta! (or not) 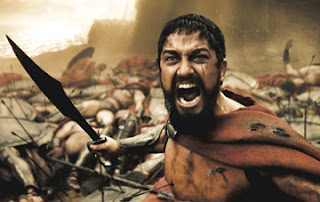 I went to see 300 today with my father-in-law. It's the first movie I've seen on release day since Belle was born. The movie is unabashedly gory and not particularly insightful or thoughtful. It wasn't meant to be. It's basically eye candy for that brutish part of men that likes large dramatic battles and defiance against all odds. It taps into that part of us that admires sacrifice and a willingness to lay down one's life for others. There are some brief speeches about freedom and whatnot, but the movie doesn't pretend to be much other than what it is - an adaptation of a graphic novel story about a bloody battle. It was very clearly a comic book adaptation - and it had excellent cinematography. The movie marketers didn't even both with the whole "based on true events" angle, nor did they include those epilogues that talk about how the wonderful characters in the movie made the world a better place in the end. The movie makes no pretensions at being actual history.

Still, some people see fit to criticize 300 because of its lack of historical accuracy or deep dialogue. One review, which I have forgotten the location of, actually suggested there was some racist overtones in the fact that the Greeks are white and the Persians (badguys) are brown and black. Please, people. Can we just enjoy a mindless/dramatic action movie for what it is and not be pompous and demand complete historical accuracy from our entertainment? Seriously, some critics need to get a grip on themselves. If a movie doesn't claim to be historically accurate then we can't criticize it for not being so. If people are dumb enough to accept it as history it's not the fault of the story, it's the fault of the people. And calling the movie racist? Critics are some of the most self-righteous, self-important, snobby people. So often I read reviews that rather are laments about how the movie wasn't good enough for the magnificent critic. And I'm a history buff, I love history, I was a history major. I can still appreciate a movie like this for what it is.

Email ThisBlogThis!Share to TwitterShare to FacebookShare to Pinterest
Labels: entertainment

I love Belle very much. I just wish she would go back to sleep after you feed her in the middle of the night instead of pulling her binky out and complaining about it until you fix it.
Posted by Jackson at 03:25 No comments:

The weather in the Bay Area has been pretty great the last few days. The sky is blue, the sun is out, and the hills are green. The hills around Fremont are gorgeous during the last bit of winter and most of spring. The rain keeps them a verdant green. I've never been to Ireland, but a friend of mine who has says that Niles Canyon in the spring is as beautiful as anything he saw on the Emerald Isle.

Belle is still too young to really know what's going on around her or even what she's seeing. She's five months old as of yesterday and has just recently started to become very aware of her world. She tracks objects really well, cranes around (in often hilarious ways) to see things she's curious about, and wants to touch everything (subsequently placing it in her mouth for further inspection). The last week or so she's had some sort of cold and the last couple of days she's been quite grumpy and had an especially hard time sleeping, which is out of character for her. So far the thing that's worked the best to mollify her when she's upset is taking her outside. Her little eyes get incredibly wide as she is taken into the outside world; she begins to coo and giggle at everything, even the wasteland we call a front yard.

This is one of the best things about being a father so far. Belle finds wonder in the most mundane things. Her eyes light up when she sees the juniper bushes in front of our house. I'm not a big fan of those bushes. To me they are a haven for spiders and other such undesirable things. Belle looks at the world around her and marvels at trees and dirt and bushes and lawns and cars and bricks on the sidewalk. It brings me a particular sort of joy to see the way she reacts when Belle looks around at these things for the first time.

She doesn't see a tree as a plant sucking up water from the soil, processing carbon dioxide and emitting oxygen. To her it is something entirely different, something mysterious, wonderful, and impossibly huge. To her a dandelion isn't a weed - it's a bright attractive yellow splash on an otherwise uniform ground. Seeing the wonder and joy in her eyes as she observers her world is amazing. It makes me want to show her so much, to take her so many places, just so she can see and experience new things. It's a partially selfish desire - because my heart warms up every time she lets out a squeal of delight upon seeing something I'd consider mundane.

Being a dad is pretty great. I've said it before, but it is both the most difficult and most joyful thing I've ever been a part of. Even with the lack of sleep, added stress and complication to my life and marriage - I'd rather be Belle's father than have a simpler life. I can't imagine myself as not being Belle's dad. It makes life harder, but it makes life better. I am a special kind of blessed to be the father of a beautiful little girl and the husband of an incomparably fantastic woman.