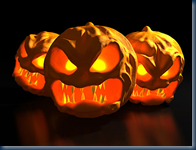 Growing up, my brother Dave and I were not allowed to dress up in costumes for Halloween.  My parents (or at least my Mom, I don’t know how my Dad felt about it) thought Halloween had some occult influence that we would be subject to if we were to dress up.  Every year our elementary school would have a Halloween Parade, where everybody could dress up and march around the campus to show off their costumes.  Each year Dave and I would tell people we forgot our costumes because we didn’t want to explain it all to them.

At some point my parents relented – I believe it was around the time they split up and we stopped going to church at all.  I had a few years of trick-or-treating while I was in high school, at that borderline age where you probably shouldn’t go trick or treating anymore.  I didn’t really care about that because I’d never gone as a kid so I was going to get mine.

You may or may not know this but the point of view my parents had regarding Halloween is still somewhat prevalent among some groups of Christians.  It’s why lots of churches host “Harvest Festivals” in the suburbs where we have no idea what a harvest is.  Some churches try to get into the spirit of Halloween by putting together “haunted houses” that are actually a tour of the eternal torments of Hell (as imagined by them).

I know there are many well-meaning Christians who think this way, and I know my Mom was just trying to do what she thought was right.  But man if Evangelicals can’t find a way to suck the fun out of everything.  There is such a reluctance to break from the established (church) social norm and engage the brain to consider what Scripture really does say about something.  Oftentimes instead of listening to Scripture, we listen to the “tradition” that’s been established by other Evangelicals and what they say the Bible says.  All the while we claim “we’re just doing what the Bible says” but in reality we’re just doing what someone has told us the Bible says.  That’s another post, which I think I’ll be doing in the near future.

I recently read a great post about this perspective some Christians have on Halloween, over at the Internet Monk.  Here’s a little bit of what he has to say about it:

It bothers me that any lie, exaggeration or fiction will find thousands of eager believers to pass it along.

It bothers me that the Biblical message about Satan would be co-opted by the fear-mongering and manipulation of the hucksters. (Read The Screwtape Letters for some real Satanism.)

It bothers me that such a wonderful part of my childhood and of American life has been turned into an example of evangelical paranoia and gullibility. We ruined something good, and everyone knows it but us.

I know all about the sophisticated responses thoughtful Christians have about Reformation day and All Saints Day. That’s fine, but it’s not the same. I just want my grandkids to be able to dress up in cute outfits and trick or treat without the local church designating them for exorcism.

Shame on those of us–evangelicals–who allowed Halloween to be taken away from families and many communities, all because we prefer to believe that life is a Frank Paretti novel.

I grew up with that same mentality, but in my culture they actually do celebrate witchcraft, pray to the dead, demons, talk to crazy spirits, and do weird stuff (burn a chicken head, with frog eyes) Day of the Dead (Nov. 1). So that's why at least a lot of Hispanic evangelicals don't celebrate Halloween because it is actually doing things that you are not supposed to do. Anyways, I can see your point but I don't regret my parents not allowing me to participate in Halloween activities, nor do I feel like I missed out on a part of my childhood. I'm actually a big scaredy cat with all of those things, so I didn't mind.

If you couldn't tell, the last comment was from me, Melissa.

Haha yeah, having known Jesse since we were in Jr. High I was able to figure that out. Either that or his parents are really really good at hiding their practices from outsiders.

I don't necessarily regret not being able to go trick or treating. It's not like I needed more candy, I was fattening myself up quite nicely without the help of Halloween. It's more the mindset that produced the action that I was talking about. I can totally see how people from some Hispanic cultures take a step back from it, it's tied to a lot of negative stuff.