It’s the end of the year and as much as I’d like to find something interesting or profound to say I can’t.  As I type this I’m sitting in the doorway to Belle’s room while she is going down for a nap.  Since we’re on Christmas break we decided to get her out of our bed and into her own; things are going well.  Right now she is singing to herself rather than screaming “DADDY I NEED YOU!” for an hour.  Pretty soon I expect I won’t have to sit in her doorway and she’ll just go to sleep.

I just wanted to put up a post here to thank all of you who read for reading.  I know a few of you read this blog and comment and I know there are some of you who don’t comment.  I generally just do this blog to get out some creative energy (such as mine is) and offer my thoughts on a few things.  I appreciate any time any of you spend reading this and I especially appreciate any time you contribute by commenting or e-mailing me.

If you read this blog I’d love to hear from you via e-mail or a comment or something so I know better who is actually reading.  And if you have any particular thing you’d like me to post about or something feel free to offer suggestions.  Lots of times I just don’t know what to write about.

So thanks for reading this year, I hope next year is better, and I hope you have a safe and happy New Years’ Eve. 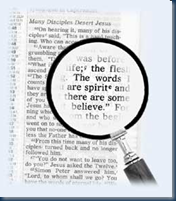 This is the post I have been wanting to write for a long time about interpreting the Bible.  I think it is useful reading both for those who believe the Bible is God’s Word and those who remain unconvinced.  I think sometimes Christians like myself forget what a big thing it is to say “God says” XYZ, and then quote Bible verses for it.  Everything we say about what the Bible says is an interpretation of what it says.  So how do we properly interpret what it is saying, so we can get at the message the Bible is communicating rather than the message we want to put into it?

In some previous posts and comment threads, questions have arisen as to how it is that we arrive at interpretations of particular verses – how do we decide what they say?  I plan on doing a short series of posts with some basic hermeneutical and exegetical guidelines to help shed some light on that process – but for now, check out what the internet monk has to say.  Here’s a little of it:

In all seriousness, evangelicals have a remarkable problem when it comes to treating the scriptures with respect. It’s astounding how many Christians tend to act as if any thought that comes into their head pertaining to the Bible is de facto true because they believe the Spirit is guiding them. If your use of the Bible were like handling a gun, you might have shot several people by now. Put that thing down and learn some basics on using the weapon.

Click here to read the rest.  I would recommend different books than the iMonk when it comes to learning about hermeneutics but I think he has a lot of good stuff to say about the importance of realizing just what we are doing when we go at interpreting scripture.  Understanding Biblical interpretation is important both for those who accept and those who do not accept the Bible as something special.  Those who criticize the message of the Bible while not understanding how to read it are as mistaken as those who use the Bible as a club claiming divine authority all the while using terrible hermeneutical and exegetical processes.

People You Will Meet in a Prayer Circle

Some of you won’t be able to identify with this, but some of you will.  In Christian circles (no pun intended) we tend to pray a lot.  The manners and social aspect of prayer with others have always been interesting to me.  It took me a long time to be comfortable praying out loud in front of others, but I eventually got over that.  That was a good thing, because once I started working at a church I was the Official Prayer at every family gathering.  Every time a prayer was called for it was assumed I’d do the praying.  But that’s not the point of this post.

One of the more common ways Christians pray is in a prayer circle, where everyone stands around (handholding optional) and takes turns praying out loud.  Today I came across this hilarious list that anyone who has been involved in your standard evangelical Christian prayer circle will be able to relate to.  It’s a list of people you will meet in a prayer circle – and it is wonderfully accurate.  Here’s a taste:

2. The Almost-er
This is the person sitting near you that is constantly on the verge of praying. You can hear them doing that little breath thing, that small inhale that occurs a split second before someone speaks. And you can hear it because it's loud in the deafening silence of the prayer circle. Every time you are about to say a prayer you hear the Almost-er and you stop out of courtesy. And then they don't pray. So you start again and an inhale from the Almost-er stops you again. It's quite a little dance.

Click here to read the rest of that article.

I want to share a passage I read a while ago that’s always stuck with me when I think about the issue of pride.  In Matthew 11.28-30, Jesus says this:

“Come to me, all you who are weary and burdened, and I will give you rest.  Take my yoke upon you and learn from me, for I am gentle and humble in heart, and you will find rest for your souls.  For my yoke is easy and my burden is light.” – Matthew 11.28-30 (NIV)

What follows here is part of A.W. Tozer’s great work The Pursuit of God, where he discusses a bit of what he thinks Jesus means when referring to the burdens we carry around.  This is one of my go-to passages when I’m thinking about pride:

The burden borne by mankind is a heavy and a crushing thing.  The word Jesus used means "a load carried or toil borne to the point of exhaustion."  Rest is simply release from that burden.  It is not something we do; it is what comes to use when we cease to do.  His own meekness, that is the rest.

Let us examine our burden.  It is altogether an interior one.  It attacks the heart and the mind and reaches the body only from within.  First, there is the burden of pride.  The labor of self-love is a heavy one indeed.  Think for yourself whether much of your sorrow has not arisen from someone speaking slightingly of you.  As long as you set yourself up as a little god to which you must be loyal there will be those who delight to offer affront to your idol.  How then can you hope to have inward peace?  The heart's fierce effort to protect itself from every slight, to shield its touchy honor from the bad opinion of friend and enemy, will never let the mind have rest.  Continue this fight through the years and the burden will become intolerable.  Yet the sons of earth are carrying this burden continually, challenging every word spoken against them, cringin under every criticism, smarting under each fancied slight, tossing sleepless if another is preferred before them.

Such a burden as this is not necessary to bear.  Jesus calls us to His rest, and meekness is His method.  The meek man cares not at all who is greater than he, for he has long ago decided that the esteem of the world is not worth the effort.  He develops toward himself a kindly sense of humor and learns to say, "Oh, so you have been overlooked?  They have placed someone else before you?  They ahve whispered that you are pretty small stuff after all?  And now you feel hurt because the world is saying about you the very things you have been saying about yourself?  Only yesterday you were telling God that you were nothing, a mere worm of the dust.  Where is your consistency?  Come on, humble yourself and cease to care what men think."

The meek man is not a human mouse afflicted with a sense of his own inferiority.  Rather, he may be in his moral life as bold as a lion and as strong as Samson; but he has stopped being fooled about himself.  He has accepted God's estimate of his own life.  He knows he is as weak and helpless as God has declared him to be, but paradoxically, he knows at the same time that he is, in the sight of God, more important than angels.  In himself, nothing; in God, everything.  That is his motto.  He knows well that the world will never see him as God sees him and he has stopped caring.  He rests perfectly content to allow God to place His own values.  He will be patient to wait for the day when everything will get its own price tag and real worth will come into its own.  Then the righteousness shall shine forth in the kingdom of their Father.  He is willing to wait for that day.

In the meantime, he will have attained a place of soul rest.  As he walks on in meekness he will be happy to let God defend him.  The old struggle to defend himself is over.  He has found the peace which meekness brings."