what makes a hypocrite? 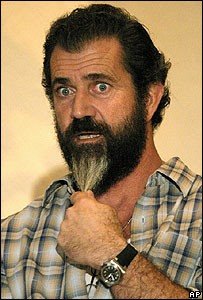 Yeah, that's Mel Gibson. This weekend he was arrested for a DUI. Apparently he was driving under the influence on the Pacific Coast Highway in California, 42 mph over the speed limit. He also reportedly wigged out on the deputies when they pulled him over and launched into a tirade about how evil Jews are, and how they are to blame for every war in history. Basically as crazy as he looks in this picture here is how he reportedly acted. He's also not contradicting reports of his crazy behavior, having released an apology today for his "horrific relapse."

I have heard some discussion of his actions, and some have referred to him as a hypocrite for doing this, considering his hyper-conservative and old-school Catholic views that presumably outlaw such things as driving drunk. It begs the question, what makes someone a hypocrite? If you have and advocate a moral code but do something that violates said moral code, does that make you a hypocrite?

A couple definitions I've found list a hypocrite as someone who advocates a view/position they do not in fact hold, or someone who puts on a mask to pretend to be someone or something he is not. I've heard the word itself comes from classic Greek plays, wherein actors were called "hypocrites" because they put on masks to become someone else. Of course a word only has the meaning we ascribe to it, but does doing something that violates your moral code make you a hypocrite?

I personally think that if someone pretends to hold a moral code, or simply says "this is wrong" or "that is wrong" with no intention that such proclamations apply to themselves, then they are a hypocrite. Hypocrite carries a lot of baggage with it - we don't like them because they are fake, they pretend to be something they aren't, they don't practice what they preach. But does that mean in order to not be a hypocrite you have to be perfect? Everybody I know that holds to some form of right and wrong has at one time or another failed to live up to their own moral code. I don't believe I know anybody who believes in such a thing as right or wrong who would claim to have never made a mistake. Does that mean everybody in the world is a hypocrite?

In one regard, I'd say yes. All of us have certain chinks in our moral armor, so to speak. Not only do we all screw up and do things wrong, but there are times when we rationalize our actions in an attempt to find a way around them being wrong. I believe that makes someone a hypocrite. Doing something wrong makes you human, not a hypocrite. If once you've made the error and either noticed it (we all have blind spots) or had it pointed out to you, you try to explain away your behavior as appropriate or find an exception you fit into, then you are being hypocritical. And all of us do this from time to time. We all have times where we are hypocritical and try to make an exception for ourselves when it comes to whatever moral code we adhere to. It would behoove us, if we do not want to be known as hypocrites, to avoid this sort of thing. I say this as someone who specializes in rationalization. Many times I have tried to find a way to make myself look more righteous than I actually am, or convince myself that I haven't actually done something wrong because of this or that mitigating factor. My guess is this is something common to many people. But I think it takes more than that occasionally happening for someone to be branded a hypocrite.

If someone is living a secret life in direct opposition to their professed moral code then they can be labeled a hypocrite. They may regret their actions but the preponderance of their choices and lifestyle would add up to, in my opinion, aggregate hypocrisy. This is the pastor who publicly decries homosexuality and abortion but pays off his mistress to get an abortion so he can save face. It took a number of choices to get to that situation. As I said we all make mistakes and just because we make mistakes we shouldn't be automatically relegated to the status of hypocrite. That being said it is fair to consider someone a hypocrite that routinely does things contrary to their professed moral code. This leads to the idea of grace.

I believe people should be shown grace when they make mistakes. If they are repentant and admit their error we should be willing to forgive them. If someone lives a hypocritical life (like the pastor mentioned above) and earned the label of "hypocrite" then if they are repentant we should be willing to show them grace and not forever relegate them to "hypocrite" status in our eyes. This display of grace doesn't necessitate a revocation of consequences, however. When we make mistakes there are certain consequences, some more severe than others. It is human to make mistakes but we cannot expect to not have to pay any consequences for our mistakes simply because we are apologetic. Someone whose license has been revoked for repeated infractions cannot expect to have their license returned simply because they're sorry. Of course they're sorry, they were caught.

Sometimes it takes being caught to show us the error of our ways, or to have someone point out our own moral inconsistencies for us to see them. I for one hope to give the benefit of the doubt to others. I want to assume they are not being hypocritical when they do something wrong, and I want to be willing and able to show grace and forgiveness when they are shown to be in error. In the same way I want to be able to receive correction when others point out my own moral failures. In the past I have had mixed reactions to being shown my own moral inconsistencies. Sometimes I react defensively, sometimes graciously - but I am always embarrassed. I never want to be a hypocrite, but I fear my status as a human being condemns me to a life of never quite living up to the standards I set for myself. I am quite thankful that God is willing to stick with me throughout this process of life and even when I make horrible mistakes and even when I act like a hypocrite, if I am willing to admit my hypocrisy and move forward He will take me forward. I hope I can show the same grace to others, and that when others share my faults with me I can hear what they're saying without being put out by their reminding me of my humanity. Above all I hope that I will never be labeled a hypocrite, though I know that it is entirely possible since I am a fallible person. The worst kind of hypocrisy would be not giving others the opportunity to make mistakes, when I myself am a mistake-making machine.
Posted by Jackson at 14:36 No comments:

Email ThisBlogThis!Share to TwitterShare to FacebookShare to Pinterest
Labels: faith

This morning I was sitting at Peet's enjoying a cup of coffee and getting some work done. Seating is usually scarce at the Fremont Peet's but during the incident I am about to describe it was quite plentiful. At this particular location they have a long bench near the wall. This bench provides seating for two separate tables. I'd been sitting on this bench for about an hour with my stuff spread over the leftmost table. I sipped my coffee and worked while fidgeting with my leg. Chances are if you know me you know what I'm talking about - where you're sitting still but you keep moving one leg up and down. So I was doing that.

After I've been at the table for an hour this old guy sits down on the other end of the bench at his own table, ready to read the morning paper. He's there for a few minutes and then speaks up.

"Yes?" I reply, expecting that maybe he's seen what I'm working on and taken an interest.

"Could you stop moving your leg? It's shaking the bench."

There were plenty of other places to sit in this coffee shop, plenty of unoccupied seats and tables. But this guy decides to sit down on the bench I've been on and then proceeds to tell me to stop fidgeting. So tell me, am I wrong to think this guy was being rude? Of course I stopped fidgeting, there's nothing manly or "just" about me continuing to fidget because "it's my bench" or "I was here first," but come on. It's my bench, and I was here first! Sit somewhere else!
Posted by Jackson at 14:00 No comments:

Email ThisBlogThis!Share to TwitterShare to FacebookShare to Pinterest
Labels: random

So there's a new website out there, it's a social software kind of thing, called Vox. It combines a lot of things, like flickr (pictures), video, audio, blogs, etc. Sort of a combination of MySpace and Blogger and everything else you use to put "yourself" up on the web and even stay in touch with people. I think it's pretty sweet and I'd love it if everyone switched over to it right now.

I think I may also be moving over there for my blogging, but time will tell with that. For now, hop over and check it out. I think anyone can sign up for it. If you need an invite to sign up let me know.

Check out my VOX site.
Posted by Jackson at 23:06 No comments:

my problem with world cup

I realize not all "futbol" is like this, and I actually appreciate it when it isn't. But this is the stuff I saw and hated while watching the World Cup this year.
Posted by Jackson at 16:16 No comments:

Email ThisBlogThis!Share to TwitterShare to FacebookShare to Pinterest
Labels: sports

Some Mexico Pics are up Painting Posers
Originally uploaded by thecrossing.
So the first wave of Mexico Pictures - the ones from my camera - are up! All of you who took pictures, I want to get my hands on the pics so I can have some more, because I know a lot of you took a lot better pictures than I did.

Anyway, Click here to see the rest of my Mexico Pics!
Posted by Jackson at 21:28 No comments: