They say not to talk about religion or politics with your friends because it can lead to arguments.  Those last couple of posts threw that crappy advice to the wind and combined the two for a wonderful controversy smoothie.  This post should engender a bit less controversy (and therefore be a bit less interesting).

Prop 11 would change the way California State Assembly, Senate, and Board of Equalization districts are drawn in California, which is currently done by the state Legislature and the Governor through legislation.  These districts would instead be drawn up by a 14-member citizen commission made up of five Democrats, five Republicans, and four people who don't belong to either party. 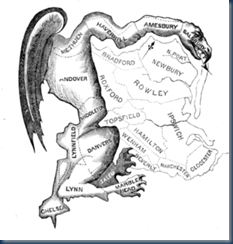 Why:  This state is gerrymandered big time.  Those in power in the state legislature don't have to fear losing power because of the way the districts are drawn up.  California's state government is terrible, our politicians are by and large terrible, and it's due in large part to this gerrymandering.  Redistricting won't necessarily fix everything, and this isn't the perfect redistricting bill, but this is better than nothing.  The whole point of a democracy is that the people have power, and representatives can be held accountable to the voters for their (mis)deeds.  As it stands our state representatives aren't accountable to us, they can do what they want - or perhaps more accurately, they can do what their lobbyists want.  I don't think it would necessarily make the state legislature less partisan - but it could help do something about the gerrymandering and oligarchy we've got going on here.

Of course, you probably can't even name your state representative or state senator.  If you're in Fremont (part of District 20), they're Alberto Torrico (he's even the majority leader...ugh) and Ellen Corbett, respectively.

Do some reading on Prop 11 for yourself.

Your position on this one really caught me off guard. Primarily I expected you to vote no because it will establish a new commission ($$$). But that aside, I don't think this will hold anyone more accountable to the people than today's process, since the 14 members of the commission aren't elected. In fact, the commission is mostly hand picked and I expect it will be even more subject to the will of the legislative leaders.

It's not clear to me that this commission will cost a large amount of money.

Also - the members of the commission aren't elected but they are split in such a way that will reduce the impact of partisanship (which can never be completely eliminated). Currently the districts are entirely written up by the people who are in power - they simply do not change hands. This may not be the perfect solution but I do think it's a big step in the right direction. It's not possible for the drawing of districts to be any more subject to the will of the legislature.

Here's a good, short read on two redistricting methods. Iowa used to be badly gerrymandered but they instituted something like Prop 11 suggests and it's worked out pretty well for them. Also, check out the link in my post and do a bit of reading on how the commission will be chosen and how it will have to make decisions. It's definitely better than the current system.