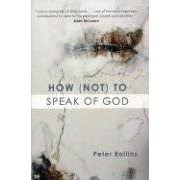 I've heard from some various people such as Andrew Jones, Scot McKnight, and Trevor DeBenning (the only person I actually know of the three) that this book, How (Not) to Speak of God is a pretty big deal when it comes to understanding the developing theology of the so-called emerging church. My history with this movement/conversation/whatever is varied. My first exposure to anything emerging was Dan Kimball's book The Emerging Church, and from there I learned of such authors as Brian McLaren, Tony Jones, Doug Pagitt, Spencer Burke, and so forth. I've read books by all three and attended workshops/talks by some of them as well. It was back in 2001 that I first became aware of this developing thing and started to more or less keep up with it because I resonated with it. I joined the ooze and started to engage a bit in the thought and questions these people were asking, identifying with much of it.

For those not familiar with what I'm talking about, suffice it to say "the emerging church" or "the emergent church" or whatever you want to call it is a loose movement (calling itself a "conversation") wherein people are trying to figure out what it means to be Christian in today's world. By and large this is characterized by sympathy to a postmodern mindset wherein we are suspicious of claims to know "The Truth" or claims to have authority, etc. If you do a Google Search on the emerging church you'll find people who revile it as the latest gnostic heresy and others who consider it the saving grace of Christianity. It's difficult to try to pin down and you can't really understand it by reading a paragraph or even one book. I would like to think that I have read widely enough of blogs and books, listened to enough speakers and sermons, and whatever else to consider myself familiar and even to an extent understanding and resonating with much of what is called the emerging church. I certainly fit the profile of your typical person interested in this sort of thing. I'm a mid-20's Christian with facial hair, working with youth, in some way between a modern and postmodern mindset, trying to follow Christ in the midst of culture while being ashamed of/disgusted with/befuddled by much of contemporary American Christianity. I was more or less raised in the church but went through some severe doubting and questioning, and don't want to uncritically accept everything thrown my way "in the name of Jesus."

As I have read and kept track and watched the development of the emerging church thing I have become less enamored with the direction I see much of it taking. I appreciate a lot of it but I am growing wary of some of the things I hear/read. Also, I'm interested in discussing ideas and epistemology and all that, but I do feel at a certain point too much discussion reaches at best silliness or at worst pretentiousness. We people can become so interested in how profound our thoughts are that we keep talking long after we have stopped saying anything worth listening to. This may sound like an indictment of the emerging conversation but I don't meant it to be. I simply mean it as an indication of where I'm coming from. I like to talk about "deep" things in coffee shops as much as the next guy but at a certain point I can't take it anymore and I want to relate it back to actual life and living and consider the consequences of the belief. If you stay in theory too long, it becomes senseless when you return down to earth to apply the conclusions you've reached. Perhaps this makes me unqualified to interact with people who have Ph.D's in philosophy or perhaps it means that things of true depth simply fly over my head. So whatever thoughts I offer, of course feel free to disregard them as the ramblings of an uncomplicated mind who just doesn't get it.

Those things being said I want to interact a bit with what I'm reading in this book, How (Not) to Speak of God. Brian McLaren, a prominent figure in the emerging conversation, says it is "one of the most important contributions to date to the emergent church conversation." It is being heralded by many within the conversation as putting words to what they're thinking, of taking the conversation is a positive direction. With those credentials I figured I should check it out. I admit I am reading the book as a pseudo-skeptic with regard to the current direction of the emergent church conversation. My viewpoints should become apparent as I discuss various statements in the book so I won't bother to lay them out here. But I am reading this book as someone genuinely interested in many of the questions this conversation is asking, as someone dissatisfied with much of the prevailing thought regarding doctrine or theology or maybe even orthodoxy. I am not a doctrine hound, I am undecided on certain things, I am comfortable in embracing mystery when it comes to God, I am still working through what I truly believe about the Bible's inerrancy and inspiration and authority. I am not coming at this with my mind already made up.

I am reading this book to try to understand more of what the emerging church conversation is saying and where it is going. To see whether I really do disagree with where it's heading or if I've just been too fuzzy on it. As someone who was at first totally on board but is now less so. I want to apply whatever thinking I can to this book and seriously think about what it offers. I have decided to blog about it not because I think my thoughts are particularly profound, not because I think what I have to say is worth listening to, and not to root out them 'thar heretics in our ranks. I am blogging about it because I think this is a way I can actually think about what I am reading rather than simply tearing through it. I will also most likely not spend too much time refining my posts into masterpieces. This introductory post is already far too unwieldy and wordy. Nevertheless I will be comfortable with some rough edges and maybe some lack of development in my thoughts. If I wait to perfectly express what I am thinking I will never write anything down. So such as they will be, I welcome you to read my thoughts as I read through this book. This will be the first in a series of posts as I go through this book, How (Not) to Speak of God.
Posted by Jackson at 12:45

Mikey g says... I may be studying some of the strait philosophers who have influenced the idea of the emergant church.
Here is a little latin I picked up from my "Religious Thinking" class to show how smart I am: "Quid ergo Athenae et Hierosymis? Quid academiae et ecllesia?" Which was translated "What has Athens to do with Jeruselum? What has academics to do with church?"
It was said by some 2nd Century Christian leader named Tertullian.
A quick Wickapedia study of Tertullian show some pretty impressive credentials. He coined the term "trinity" and "New and Old Testament." But apperently he became a heretic later in his life. He joined the Montanists, who were the early church version of Pentacostals... or something.