One Way Ticket to Mars

Here’s the text of a presentation by physicist Paul Davies about one solution to the cost of a human trip to Mars – make it a one way trip.  I’ve always been a science fiction fan, so the concept of humans colonizing other planets is pretty cool for me.  This guys is basically advocating a small group of astronauts head to Mars with no expectation of returning, but with the expectation that they will eventually be joined by other humans who will establish a permanent human settlement on Mars.

The idea sounds intriguing and possibly promising – but all I keep thinking is that the people on Mars will come to see themselves as Martians rather than Earthers and then we’ll have some sort of rebellion on our hands.  When times get tough Economically here we’ll debate cutting funding to the Martian colony, or perhaps giving them less supplies, and they’ll get resentful.  Then they will engineer some kind of Martian super-virus secretly, create some kind of one-way Mars-to-Earth vessel, and unleash biological armageddon on Earth in preparation for a re-conquest.

Alternatively, they will discover the ruins of an ancient civilization and return as our overlords with vastly superior technology.

Or possibly they will be wiped out by aliens on their way to Earth, but their sacrifice will serve as an early warning for us.  But that really would only work if the aliens weren’t too smart and went for the little colony before Earth.

In one possible scenario, the colony will be overtaken by a psychotic who forms a cult and turns it into his or her own kingdom where they kill the heretics and then demand recognition as a sovereign nation.

Perhaps after the colony is established they will be mutated by the sun’s rays in heretofore unknown ways and become a kind of super-race.

The possibilities are endless.  Spaceward ho!

Email ThisBlogThis!Share to TwitterShare to FacebookShare to Pinterest
Labels: science

The other day I randomly remembered something I did to my brother Dave years ago.  It just popped into my mind, and I thought about what a jerk I was.  I’ve often remarked “I’m glad Dave still likes me” because I did some mean things to him when we were younger.  If I were to psychoanalyze things I could probably find a few things to blame for my actions: stress from our parents’ divorce, being a dork and needing to have dominance over someone, personal insecurity, the fact that we were often stuck together for extended periods of time, etc.  Really though, that’s not very entertaining and those are basically excuses.

In case you didn’t know, my brother Dave and I are 17 months apart.  I’m a little older than him, though in school I was two grades ahead because of where our birthdays fall.  We have one sister, who is seven years older than me.  This made the two of us de fact best friends and we played together a lot.  In many ways we played out the archetypal roles of big and little brother.

I’m going to do some posts on thing I did to my brother that were pretty messed up.  Some are more messed up than others of course, but hopefully they will entertain you to some degree.

Dave and I grew up loving to play video games.  We had an Atari as little kids, a Nintendo a bit later (we got that late), a Super Nintendo, and eventually an N64.  We were never really at the cutting edge of video games growing up because we never really had the money to pay exorbitant prices for games.  Still, our parents often stretched their finances too far to get us those video games we wanted on holidays.  While we were often partners in crime in the video game world, both lobbying our parents for favor and games, I definitely found ways to be a jerk to Dave:

1. I always got Player One.  Dave wanted to be Player One, but I insisted upon being Player One at all times.  I wanted control of the menu, I wanted to set the options, I wanted to hit “continue” at the end, I wanted the left side of the screen.  I demanded the P1 controller and if I didn’t get it, Dave felt the pain.  This rarely came up because I established my place as P1 early and he usually didn’t fight me on it.

1a. I got first pick of characters.  Occasionally we’d play a game,  like TMNT, where you had a choice of more than two characters.  If this were the case, I would always demand first choice.  If I wanted to play as Michaelangelo, Dave could not.  Ever.  I always got first choice.  If he got used to playing a different character and I changed my mind – then he had to get used to playing a different character.  I usually picked my favorites and stuck with them – and I often tried to convince Dave that his guy really was cool so he thought it was his decision and not mine – but if a conflict ever arose I made sure I got to play who I wanted.

2. In co-op games, I had power-up priority.  If there was ever a

chance to upgrade your weapon or get a power-up in a co-op game, I had priority.  I wouldn’t hog them all, of course. (It’s important your teammate has upgraded weapons too, after all.)  But in most games there would be some kind of upgrade tree – you could have missiles or spread shots or whatever else – and I always got to choose my tree.  If there were no trees then we would be pretty good about taking turns with the power-ups – but I always tried to make sure I had full advantage of the upgrades, and if there was anything left over for Dave that was fine.

3. In single-player games, Dave had to help me but I may not have helped him.  Mega Man 2 was a single-player game, but if you held down the A button on the second controller, then the person playing the game could “super jump” and would never die if they fell into a pit.  Any time I wanted to play I would make sure Dave held the button down for me.  He had to sit there and watch me play.  If he wanted to do something else he would not be allowed to do so.  Occasionally he realized he held some power because if he took his finger off the button (something he did “accidentally” quite often) my guy would die.  This led to some negotiations (if you hold the button for me I’ll hold it for you) but by and large I made sure if there was some way Dave could help me while I was playing a game I would get him to do it.

4. Dave got the crappy controller. As Big Brother (and Player One),

I saw it as my right to have the best controller.  We always seemed to have one good controller and one sub-optimal controller.  Whether it was because a button was sticky or it was some stupid “custom” controller, one was almost always inferior.  I made sure Dave used that one.  Of course I would try to convince him it was better if I could, but in the end it just came down to me demanding my way. 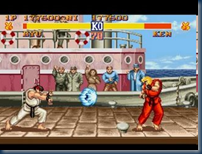 5. He could not “cheap” me.  If Dave were beating me at any competitive game I would generally accuse him of “cheaping” me.  This term comes specifically from Street Fighter 2.  He’d jump at me in the air and keep hitting the “short kick” button, which is a really fast strike.  He’d jump up as Ken (I got to play Ryu because I wanted, and he was stuck with Ken) and that freaking knee would come down on me.  I wasn’t good enough to do anything about it most of the time, so whenever he would start “cheaping” me I would warn him.  I’d say:

“Stop cheaping me!  Stop or I’m going to hit you.”

*He continues to beat me.*

*He furiously hits the button, trying to kill my guy before the inevitable occurs.*

*I hit him in the shoulder until he stops.*

I’m sure there were other ways I was a jerk to Dave over video games.  I think I remember trying to convince him to ask for a video game I wanted for his birthday so I could get the game.  These are the ones that come most readily to mind.  I have some real fond memories of video games with my brother.  It was practically a tradition for the two of us to ride our bikes to Doorstep Video and rent a video game or two for the weekend on Fridays.  We had lots of fun playing games together, like Contra or Guerilla War (so much fun) or one of the countless games where you fly a plane and blow up everything on the screen.  Oh yeah, and Double Dragon, that game was awesome too.  Lots of good memories – but man, I was a jerk!

Things have been fairly busy of late, hence my lack of updating this blog.  I’m currently trying to expend any extra mental energy I have in preparation for the English CSET.  It’s a big several-hours-long test (or rather, collection of 4 tests) I’m taking to prove subject matter competence in English.  With that, I’ll be able to teach both English and Social Science in High School.  This should increase my employability, as I’ll be able to teach a wider variety of classes.

English has always been a strong subject for me because I’ve always enjoyed reading.  I also tend to enjoy being pedantic, so you’d think this test would be easy for me.  As it stands I’m not too worried about two of the tests.  They will require a bit of brushing up but for the most part I should be able to write my way through them.  One of the tests is entirely multiple choice and it covers grammar and linguistics.  As far as grammar is concerned I generally know what sounds right but have a hard time explaining what past perfect progressive tense is or what a participle phrase is.  Linguistics are almost completely new to me as an area of study deeper than the occasional pop science article.

So back to studying.

FYI - “past perfect progressive tense” is used when you are trying to indicate an ongoing event that was completed in the past prior to some other event.  For example, “I had been anticipating a Social Science job until I learned they were slightly less in demand than baristas.”

And yes I had to consult my notes to remind me what past perfect progressive tense is.