they weigh lots of tons 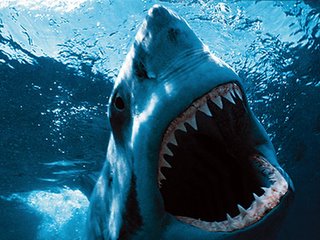 Great White Sharks really scare me. More than aliens even. Seriously, they freak me out. I'm not the hugest fan of getting in the ocean, because once I'm in there, there's nothing separating me from those huge monsters and their teeth. Just water, which they can swim through, really fast.

Last night I had a dream where I escaped some sort of place, with a rocky shore. I escaped into the ocean, however - I think it was the San Francisco Bay - and got a little scared once I realized I had to swim to safety. The water was choppy, but in I went, knowing it was my only way. Then what happens? Right below me I see the gigantic forms of two Great White Sharks swimming around. They were huge. So I start thinking oh man, this is bad...just gotta not look like a seal, don't look like prey, just try to get to that rock outcropping over there. So I start swimming...but not swimming too much because I don't want to attract the sharks' attention.

Soon after, I see a woman paddle past me on a surfboard. This is odd, because as I mentioned we were in the SF Bay, surrounded by rocks - you wouldn't see a surfer out there. That's what I saw, though, and sure enough one of the sharks came right up and swallowed her. I was spared gore, as she was simply swallowed, but I was really scared. I was also certain the shark had seen me as it poked its massive maw out of the water. I panicked and realized I was going to die. There was another shark down there, they knew where I was, and they had just demonstrated an affinity for manmeat.

I was so scared, I wanted to get out of there any way I could. It was about that time that I considered the possibility that I was in a dream. Maybe this is a dream, I thought. Then I'd be safe. Please be a dream, please wake up, please wake up... And then I woke up. I'm not sure I've ever had as much residual fear after waking from a dream. I got up and went to the restroom but the whole time I just had this sense of terror over me from the freakin sharks.

Man. Great Whites. Why do they have to exist?! Next time I dream about them I better be riding them into battle or something. This getting chased around stuff isn't going to cut it.
Posted by Jackson at 13:20