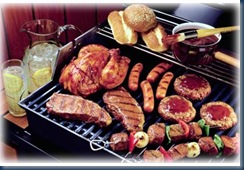 One of my aspirations is to become as good a cook with meat as my Dad is.  His tri-tip is just about the best thing I’ve ever eaten.  (Though those Ollalieberries I had yesterday from my neighbor’s yard are up there too.)  I admire those who can just take a steak, throw it on the grill, and end up with something tasty rather than tough.  The people who seem to produce the best meat are those who are able to do very little to it.  Some of my best results with chicken have been when I just put a bit of salt/pepper and oil on it right before baking it.

Here’s an article on someone who experimented with salting different kinds of meat at different times.  He invited some friends over and did some blind taste tests.  Apparently this guy found it’s best to salt chicken a day before cooking it, and steak/pork does well if you put some salt on right before searing it.  I’d be interested in any grilling/meat cooking tips you have to offer.

Also, here’s a link to a summer grilling guide on the same website.  I haven’t read through it yet but it looks to have some useful info.

Email ThisBlogThis!Share to TwitterShare to FacebookShare to Pinterest
Labels: food